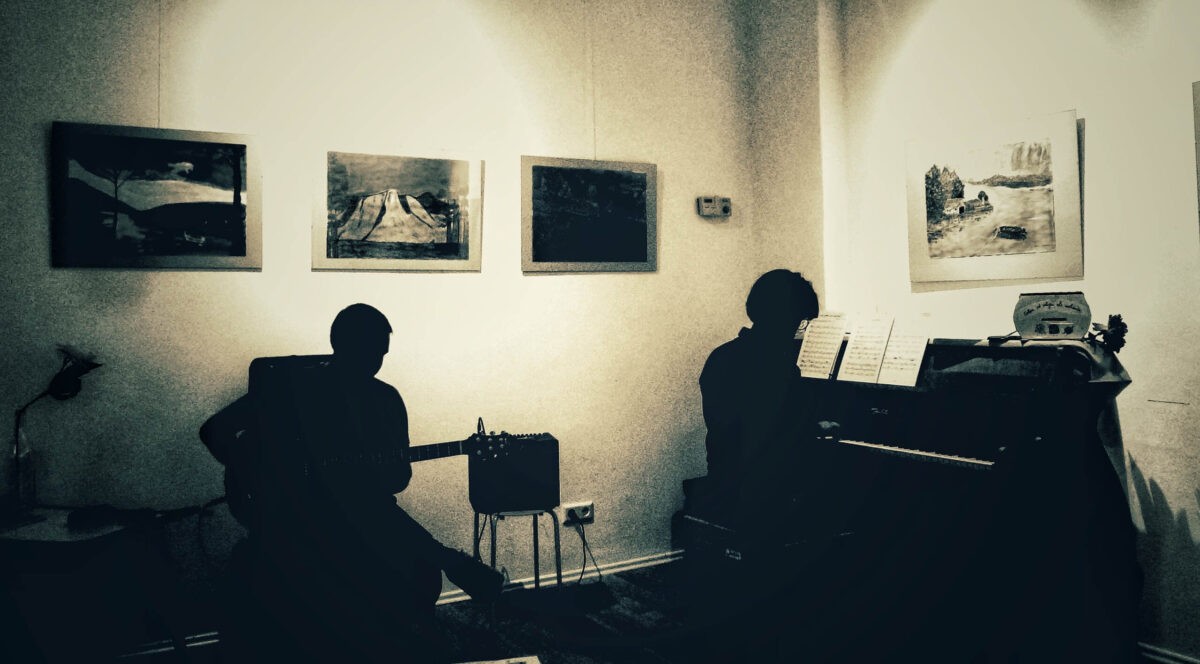 Tinctures’ first studio album “Heads and Tales” was released on August 7 via Subcontinental Records. Could you tell us about how Tinctures was founded as a project? And also about the musical background of both of you..?

Nishad: It started through hanging out and becoming friends, and playing from time to time in each others’ projects. The person who consolidated our musical bond and friendship was my Guru, renowned Hindustani slide guitarist Pt. Debashish Bhattacharya, who organised (and continues to organise) the India International Guitar Festival. Through this platform Aman and I got to play together, to learn from Guruji and meet lots of other interesting musicians. These extended periods of living and working in Calcutta intensified our mutual connection with the city.

As for our musical backgrounds, the common thread is probably jazz. Aman studied at Berklee and I at Monash (in Melbourne). Using jazz as shorthand for creative excursions using harmony, melody and rhythm, I think we have both felt at liberty to respectfully incorporate elements from various other styles. During my six years in Calcutta I studied Indian classical music, and Aman has worked with Indian classical and Carnatic classical musicians in South India. Like most musicians of our age, we have also been influenced by pop and rock in all their myriad forms. Of late both of us have been exploring the joy of unfettered free improvisation as well.

You have chosen only two instruments, piano and guitar, as the basis for this project. What caused this choice?

Nishad: We happen to play these two instruments so I guess it was not by design. We like the challenge of creating music with piano and guitar. Because they are sonically and functionally similar, we have to think creatively, and that is always a good thing. Some of our pieces, such as Serpentine, intentionally explore the creative possibilities afforded by the pairing of these two instruments.

Heads and Tales” was composed, improvised and performed by you in the period  2016–2019. Could you tell us about the working process?

Aman: We started off by taking a couple of weeks off our regular schedules to brainstorm about an original music project in Bangalore, where we came up with our first set of compositions. As Tinctures, we decided to explore the core sounds of our instruments – acoustic piano and un-effected electric guitar; and the consonance/dissonance between them. The entire album is concept-based: we’d pick a musical or thematic idea and try to work with it until we found imaginative expression through it. For example, ‘Serpentine’ was based on simplifying our instrumental roles to the point of playing a meandering, through-composed unison melody. ‘World 1–1’ was based on setting different stages as in video/computer game music. ‘Simple Machines’ depicts us and our instruments as cogs in a mechanized world. Over the years, we outsourced this approach to improvisation as well. Ten pieces on our album are in fact free improvisations, based on prompts like ‘underwater world’, a photograph by Raghu Rai, or poetry by Urmila Mahajan.

Three tracks on this album are inspired by poems by Urmila Mahajan. What attracts you to her poetry?

Aman: My mother, Urmila Mahajan, is from a Bengali family that lived in Calcutta for many years. Her poem ‘Dewdrop’ connects the ‘experience of ancestors’ to ‘the awareness that like a drop of dew / I can only be certain that / I am here now’, which essentially captures the now-ness of free improvisation, while pointing to heritage and the role of (musical) tradition in shaping what we do. The themes of her poetry seem quite compatible with the Tinctures universe, and we found them interesting to improvise with.

You are currently completing your second album Moments, Remote as part of a Goethe-Institut funded residency. Could you tell us a little more about it?

Nishad: We were fortunate enough to receive this grant through the Goethe-Institut, who have been very supportive of us. The idea of the project was born out of limitation, as many creative processes are. Not living in the same place, we wanted to creatively engage with the challenges faced by musicians who attempt to create music together online. A shared perception of time is fundamental to playing music. Under normal circumstances, both musicians experience time in the same way, allowing them to communicate and interact creatively, expressively and with rhythmic freedom. As musicians we sought to interact with digital technology, and transform it from being a static (and often limiting) medium, to something that offers new possibilities. Latency (or temporal lag), rather than being an obstacle, can be seen as a creative tool. On the basis of this idea we created (in real-time, sequentially, and separately) a series of pieces, two of which are ‘soundtracks’ for short films. We hope to release this album in the next few months.