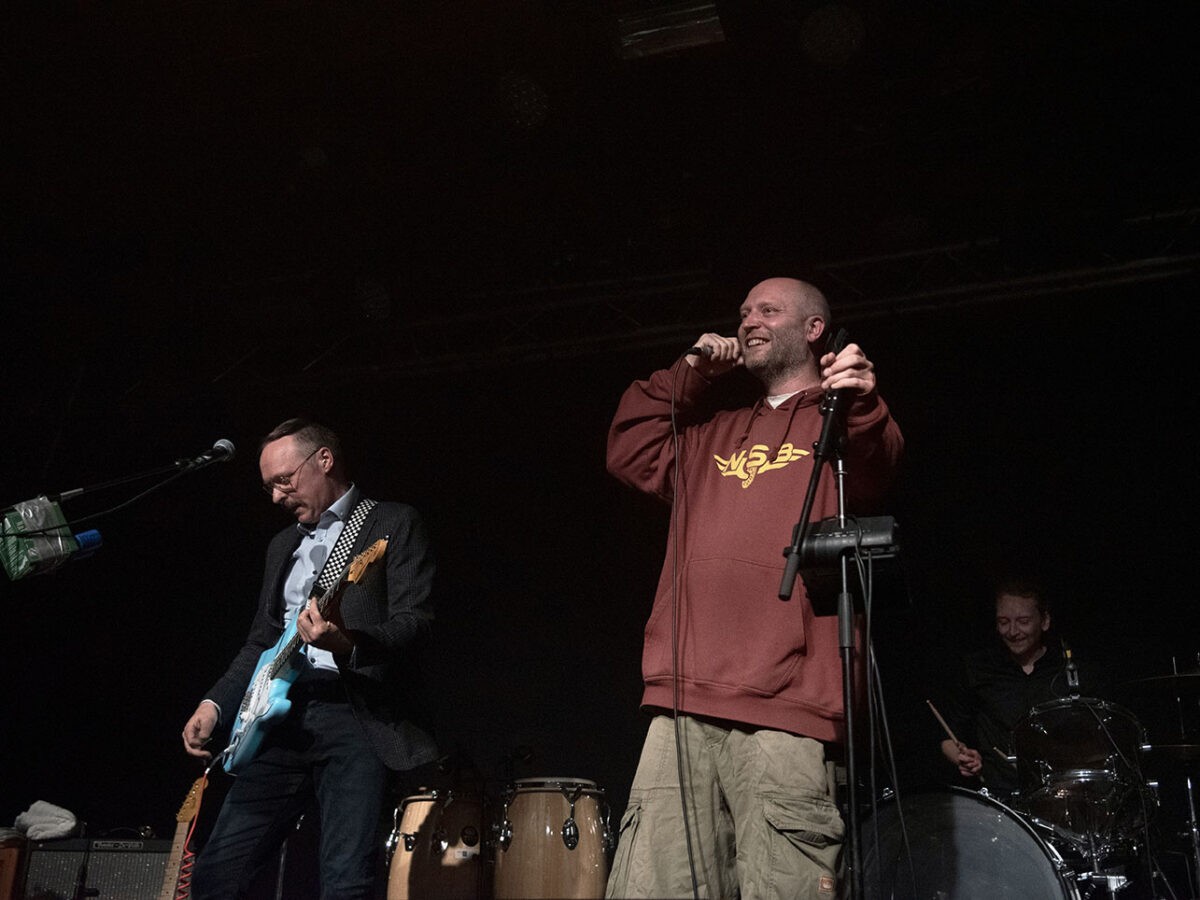 When and how was NSB founded as a band?

Stig: I played in School – a post punk band from Trondheim. After School was disbanded I released a solo album. Many artists from Trondheim participated in this album. And Trond was one of them. I made a song that I thought fits him and then I contacted Trond and he said yes. But that time we did not even meet. He just got the song and then we mixed it and released it. It was in 2013. And then many years passed and the School band was reunited. And then when we played old songs and I sang in English and felt that I can’t take it anymore – to sing in English. Then we just thought  “maybe G.O.D.S can join us..?”.  A little Beastie Boys thing to the School’ sound… So I met Trond at a cafe and he was very excited about this idea.

Trond: Yes, it was cool. Stig sent me a lot of music and I made a lot of sketches. I love trying new musical paths. So I usually say yes to trying something new, as long as I think the music is cool I have no dilemma to be on something that is not hip hop.

Trond: I think it’s just fun to rap and see that it works. The first sketch I tried to NSB’ music I had from before. And it suddenly worked in an absolutely different way with this type of beat, what made it extra fun for me

Your debut album Kajsa Kajsa was released December 2020. But you also released an EP in 2019..?

Stig: The EP from 2019 was released on 20 cassettes. There were four songs on the record. So there were 20 people who had heard these four songs. And then one single was released digitally on Spotify. In January 2020 we decided to start with the album. And make a plan to book a studio. There was a bit of a delay and then came the corona and then we could not go to the studio. So I bought studio equipment and I had some from before and we recorded the album at my house.

Trond: And it was also in the hip hop way – need some Mac and preamp and mic and so on

Stig: So there was a lot of work to do. But it was a lot of fun too. We have learned a lot. It’s like going to school while making an album. Then we send it for mix to Kyrre Laastad. And then I got the feeling that he did it a little differently than I wanted. It sounded a little different than I had imagined. But in a positive way, I think. So it was a very nice process to work with him. Øra Mastering did mastering. It was also a nice process. I think it was great to do both mix and master here in the city.

Trond: And we could go round with them and not just write by mail. A mixing round by mail is pretty hopeless stuff

Stig: We are very happy with this album. At the same time, it also feels a little that we are never really happy neither with ourselves nor partners. I think it was once or twice when I thought I made a perfect song. And it sounds perfect after the mix. But when I hear it after six months I think it’s not good at all. I’m very fond of the album here but I always feel we need to move on to the next step

Trond: It took some time to become a live band. I felt it very well. But three-four last concert we played I feel that everything falls into place and we are a band

Stig: There are very few rock bands that have rappers on vocals, extremely few. People think it’s weird. In the beginning a lot of School’ fans came, so they wanted to hear the School and then they heard rap. Everyone was polite and kind but we suddenly noticed that. After ten concerts we found the form that is much better. So we played at Trondheim Calling in 2019 and Adressa was there and they thought it was weird. But in 2020 when they were on our concert they thought it was very good

Trond: There are a lot of things to learn on this way. I have never played in a band before. I have played with musicians but not in that way in a band with the drums and so. And to play the whole concert and for me not to keep the mic and say something all the time and take a break because it must be an instrumental part here it’s something I have to learn. And also to learn to feel the music, to feel the music in the body. Because the beat is completely opposite than I used to. So it’s no wonder it took time for people to figure something out.

Do you have any particular plans for NSB as a band..?

Stig: It’s still corona here… a big black hole .. We just keep moving…We released the album, now we played the concert… What will be next ..? The dream is to make something weird and commercial. Maybe the next step is to create something that is mid-tempo. It’s hard for me. I prefer up-tempo or very low-tempo. There are a lot of young people now who – “can you make music that is mid-tempo and no edge ..?”  And it’s unfamiliar to my generation with rock but it’s clear that we are getting older now. And tapping on the radio is difficult. But we are not 22-years-old so if we did not get on the radio the world would be broken. For us artistic development is most important. But not in a pretentious way. I do it because I think it’s fun when you find a new color or make new knots. While for 22-years-old it’s more about trying to find a formula that makes them popular

Trond: So I just do what I think is fun all the time. But not that it’s always fun, all the text is not necessary must be fun. But I really enjoy making music that I like and do not care about other things. But I always think that more people should have heard and liked it. But the Trøndersk rap is not exactly what people in Norway used to hear. So Trøndersk rap generally needs a breakthrough. And someone who makes this breakthrough. That’s not what we’re trying to do here in any way. But if NSB reaches it in some way and people just begin to listen to Trøndersk rap so hope there will be one day some 20-year-old who also wants to make rap on Trøndersk

Stig: If one day there will be a new band of 20-year-old with rapper here in Trondheim, it will be really great. And if they will be inspired by NSB by only 1%, it will be very exciting to look at