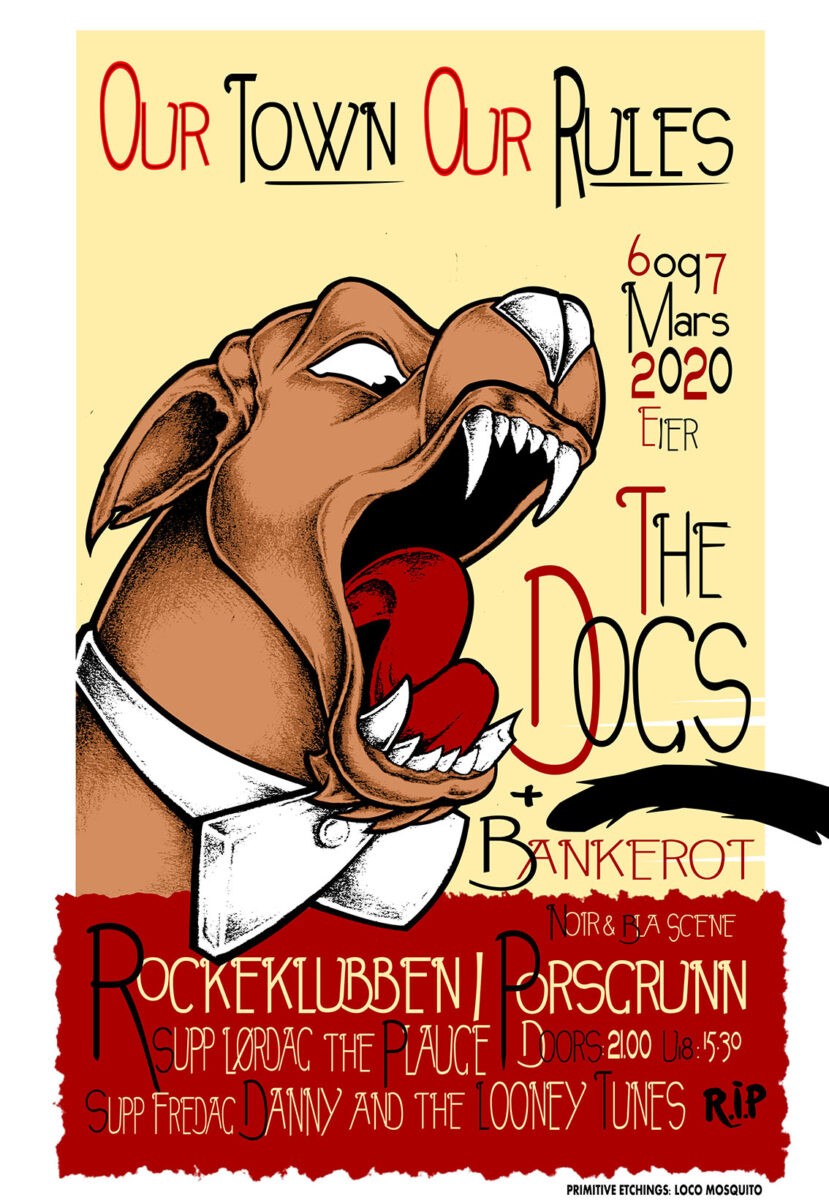 Loco Mosquito “The Posters of The Heroes He Once Had” – The exhibition at Rockheim – Det nasjonale museet for populærmusikk. Read the interview with Kenneth Apeland and Martin Hvassing – people behind Loco Mosquito

You have been working with screen printing since 2010. This is a quite laborious method to work with. Why have you chosen it for you?

There are several reasons, but the main one probably is that most of our favorite poster artists, from the “Poster Explosion”-era in the US (90s and early 2000s), used this method. After we started, we have come to appreciate the limitations, the possibilities, the DIY-aspect and of course, the labor behind it, and the satisfaction it gives when you get a good print.

Your first client was Rockeklubben i Porsgrunn. What do you remember about this first work?

It’s a long time ago, but from what I remember one of the primus motors behind Rockeklubben i Porsgrunn (RiP), mr. Dan Alexander Jupskås saw a poster we made for some friends of ours in the Grenland music scene, in a local record shop. Through a mutual friend he managed to get a hold of us and told us about this great post-rock band from Australia, The Ascent of Everest, he had booked to RiP. It was going to be epic, and he wanted a screen-printed poster for it. We went all in, drew the design, got it okay’ed by band and club, and printed a bunch of them. Then the show got cancelled, and we ended up giving most of the posters away! All fun and games! It was great!

After that we just kept making them, becoming kind of like there in house poster guys. Great people, great booking, and a great place altogether. They’ve given us the opportunity to print posters for a lot of really kick arse bands.

A question you may have been asked a thousand times before – why “Loco Mosquito”..?

Getting close to two thousand times by now…

It would be so much cooler if there was an interesting story behind the name, sadly the story is as stupid as it’s simple. A local newspaper started noticing our posters in the streets and wanted to do an interview. All our favorite poster artist used aliases, like Print Mafia, Uncle Charlie, Johnny Crap, Daniel Danger etc, and we needed one quick.

The song Loco Mosquito by Iggy Pop coincidentally was spinning in Kenneth’s head at the time, so we just went with it. It could have been way worse.

Are you working now on some projects you would like to tell us about?

The covid situation of course has made printing gig posters a little pointless. There are no gigs!

We just finished a week of teaching at Kragerø Kunstskole, which was a lot of fun. We’re also working on something big with Rockeklubben i Porsgrunn, some tee-designs, the festival Skien Live are getting a load of posters. There might also be a non-gigposter art exhibit in the works as well.

You have worked with a lot of different music bands and artists. But what are your own music preferences?

Everything, as long as it’s guitarbased. From Bob Dylan, through Smashing Pumpkins and the grunge era bands, Motorpsycho, The Dogs, older stuff like the Stones and Zappa, to the harder stuff like Slayer, Meshuggah, Satyricon and Darkthrone. We also have a foundnes for the norwegian hardcore scene, with bands like Barren Womb, Sibiir, SNÖRAS, Haust, IEATHEARTATACKS and many more.

A little bit funny question – If you could choose any artist in the world, who would you like to work with?

Kenneth: If I got to make a poster for the original line-up of the Ramones, I could die happy. Then again, to make that work, I actually might have to die first, since they are all dead? Anyways, of actual still living and touring bands, the Smashing Pumpkins is top of the list for me!

Martin: Metallica would be cool, their back catalog of posters is immense and there’s a lot of great art there, or Gojira.