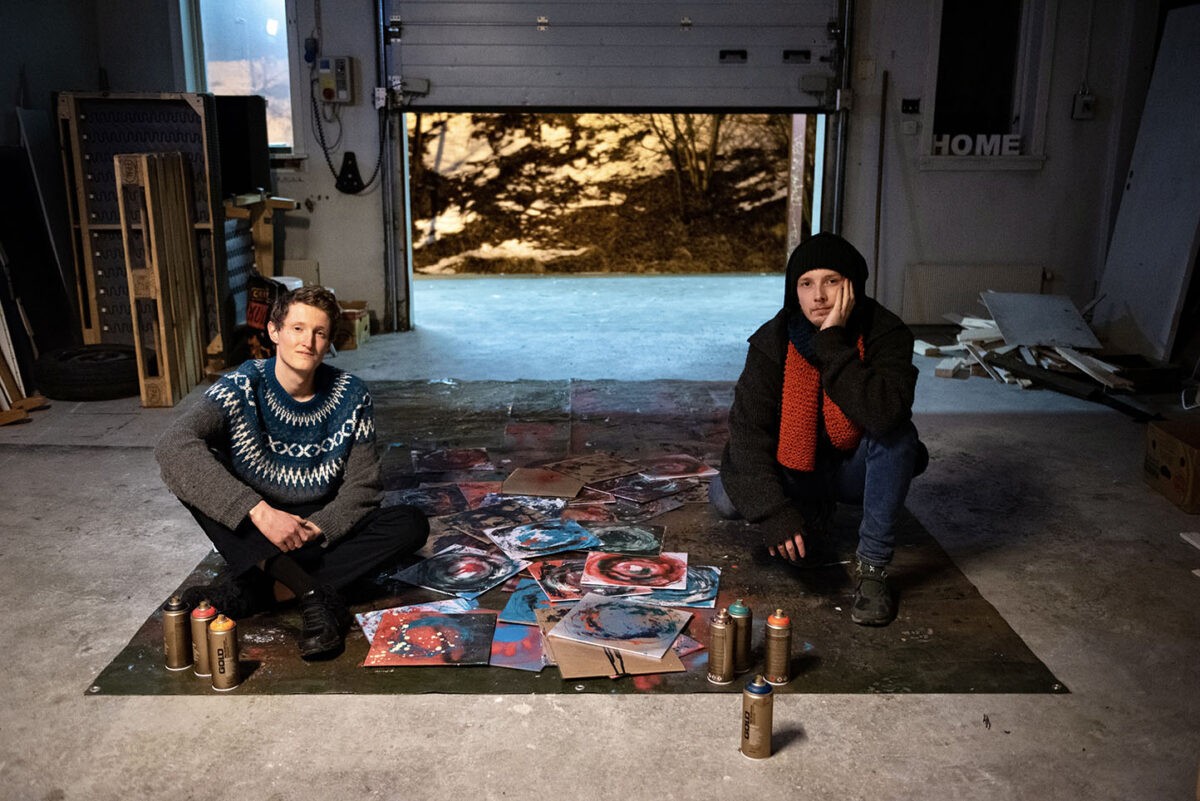 Hand painted covers, diy vibes and much of noise rock – Buy Us band’ debut album “it’s all the shame” out today on Ultra LTD vinyl

This edition is limited just to 25. So you must hurry if you want to get one of these unique records in your collection. Read the interview with the band about working on “it’s all the shame”, what’s behind the band’ name and much more.

So, without a doubt, Buy Us is one the most exciting and promising projects on the local music scene now. When did you start to play together?

It was late autumn 2020, we think. We met up at a studio Øyvind rented called Northern Wave to make some music, or anything really. We just wanted to see what we could do together. We’ve been friends since childhood and we also attended the same music lessons back where we both lived in Røros, but we’ve never really made music together.

One evening and one Fernet Branca later we had a song. It was so much fun just making music there, with no real structure or expectations about the finished product. We were lucky though, to be able to have a place where we could record anything right away. That element has been key to this release. Also writing and producing in that way comes really naturally! We both handle the instruments and Øyvind also handles the DAW.

We started meeting up like this more regularly and almost every night we had a new song. Recording anything from the guitar and the piano, to the pump organ and weird sound effects. As soon as we had a riff or a melody the song lived its own life and we just added tracks to it. Later we wanted to add real drums as we had just programmed them as we went along, so we asked our friend Hallvard Løberg Näsvall and he did an awesome job recording all drums on the release.

The band has a pretty interesting name. How did you come up with this idea?

It’s just fun to say isn’t it. Also it makes for some sort of statement as we make ugly and distressing music, it’s not very likely to be bought in an industry kind of way. This also plays a bit with the album title “it’s all the shame”, so it’s like buy us – it’s all the same, or shame or whatever. It’s not all the same of course. Everyone cares about what they produce and we do too, but we like the wording and anyone can make their own opinion about what it means. At least it sounds kinda cool, we think. The name also has a couple of similar words like bias, by us, and the norwegian word “bajas”, so it’s open for word plays in the future.

The question that 99 percent of musicians obviously hate, but I’ll take my chance – how could you describe the music genre you are working in?

Ah shit, we knew this day would come. It’s always hard to describe the genre, but it definitely has elements of noise rock. The vocals are almost always some sort of desperate screams, but we also have some slower moving songs with clear vocals or just talking. Not sure if we can call it hardcore either, but it has some resemblance to the genre. Our bio on spotify says “it’s supposed to be ugly” so maybe that’s that. Or maybe it’s just a defence mechanism.

What about your inspiration?

Inspiration? It’s fun! Making music is great, and these studio sessions have been creative outlets where we can test all sorts of musical ideas and approaches to songwriting. We don’t normally set any genre boundaries when we start out writing a new song, but it has kinda naturally evolved into this noisy hardcore-ish territory. Maybe some emo/screamo influences in there? We don’t know.

Some bands that come to mind when trying to describe our sound, or that have just served as general inspiration: Pissed Jeans, Årabrot, Daughters, Melvins.

We haven’t really tried sounding like a whole band or a distinct genre, though. Usually we interrupt our recording sessions multiple times each night with listening to songs we like or that can give us some inspiration for certain parts of a song. This has ranged from Billie Eilish and Soccer Mommy to Idles and Portrayal of Guilt, and doesn’t really say that much about our overall sound, but gives us plenty of inspiration to how the drums could move, how to use this and that instrument in the mix etc. etc.

These hand made covers have become true pieces of art. Could you tell us more about them?

All the covers for the vinyl records are painted by hand by us. This started as just trying to do the release as cheap as possible, but ended in it being a super fun project which actually turned out pretty great. It also goes well with the kind of diy vibe we wanted from this whole project.

We had our friend Oliver Korssjøen join us as well, and together we did the painting in one evening, just going nuts with spray paint and some watercolour and acrylic paint. The result is 25 different record covers, each with its unique paint job, but still with a similar theme that make them all look connected in a way. And the digital artwork for this release is actually a collage of all the hand painted covers we did, so they are all on display there!

We also made some music videos for the different songs. We just went around the neighbourhood and filmed places and settings we thought would fit the mood of the songs. We try to do everything we can ourselves and outsource what we need to outsource. That being mastering, which is done at Øra Mastering. Really happy with the job they did there. And the vinyl cutting was done at Oslo Vinylfreseri, which turned out great. With long queues at the major pressing plants, and the often 200 minimum limits they have, Oslo Vinylfreseri was perfect for this, being able to print as many as we wanted. 25 copies seemed right and within budget.

Where can we listen to your music?

It’s out on most of the digital streaming services as well as on SoundCloud and Bandcamp. If you want to buy one of the 25 vinyls with a hand painted cover, just send us a dm on instagram!

What are you working on now and what are your future plans?

We have started on some new music, starting this year with writing a song together with our friend, Jonas Jansen Ramsfjell (BAKRUS) and we think it turned out really great (it’s out on Soundcloud as a demo). But since we recently lost our studio due to the building being torn down in exchange for apartments, which is really sad cause it housed a lot of art, music and dance studios and rehearsal spaces, we are currently looking for a new place to work. After that we will just continue writing new stuff, inviting anyone who wants to join in in any way, aiming at a release as soon as we have it ready.