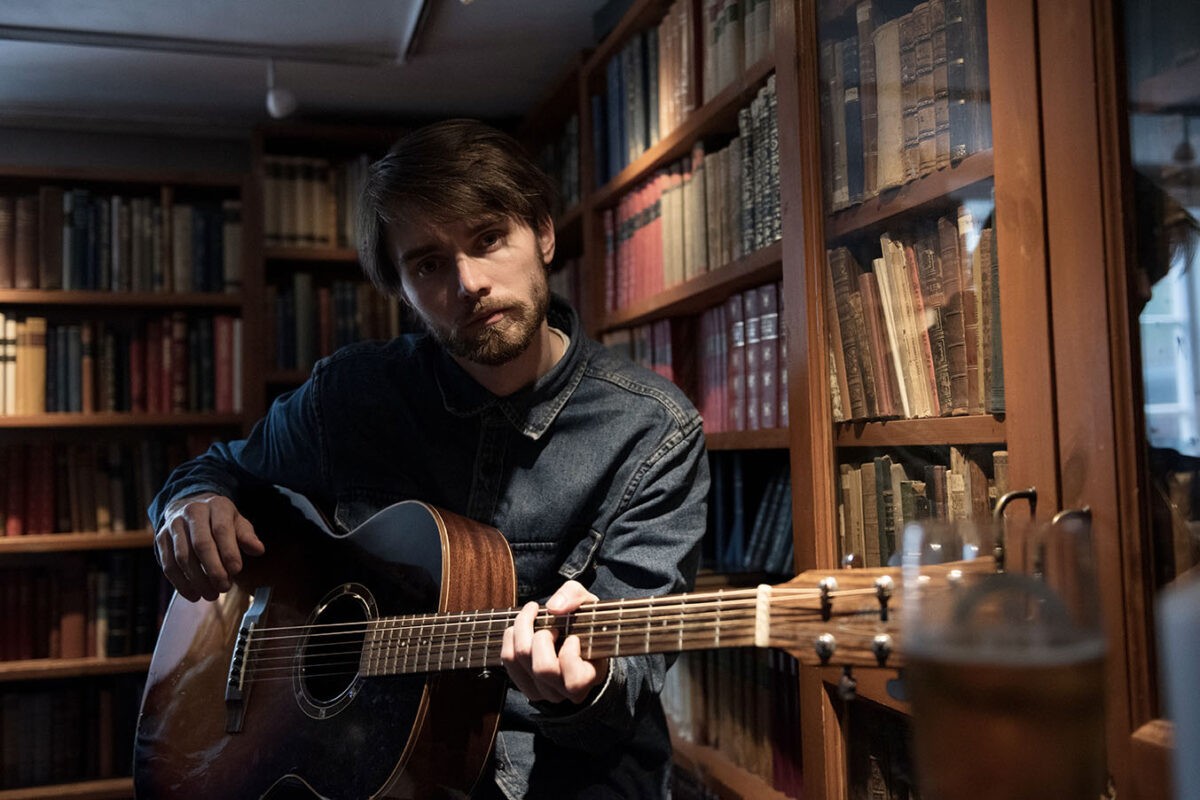 Jonas Ledang is playing a concert at Antikvariatet on November 5 and working on a lot of new music. Read the interview with the singer-songwriter

“The Rebound”, the first single from your upcoming album “The Heart is a Lonely Hunter” was released on September 3rd. It was released over a year after the previous single “All Kinds of Blue”. What happened to you during this long time?

Well, the pandemic kind of messed up our plans to tour with the last album so that’s where All Kinds of Blue came from. It was just a stand-alone single, it won’t be on the new album. We just wanted to give people something while everything was standing still. I’ve been coping with the situation in my own way, writing a lot of music and spending time in the studio when possible. There’s been ups and downs, but I’ve written a lot of songs.

The title “The Rebound”, what does it mean to you personally?

A rebound in soccer is when the ball bounces off the goalie after they make a save and the ball remains in play, so there’s potentially a second chance to score. That’s the gist of it I guess, it’s about making mistakes and falling on hard times but getting a chance to make things right on the rebound. If not getting a second chance then at least learning from sorrow, striving to be better and not making the same mistakes over and over. For me it’s personal, I have many regrets and I’ve made mistakes. I try to do better. It’s not a happy song, but It’s not hopeless either. It’s like me.

Your new album “The Heart is a Lonely Hunter” will be released in February 2022. What do you think, how has your music changed since the previous “Information Therapy” from 2020?”

I think it’s easy to look at the wrappings, the production, and say ‘well, it’s less produced it’s more organic, there’s no big synthesizers’ and that’s certainly a big part of it. I’m constantly developing my songwriting and we always want to play to the strengths of the lyrics and the melody. This is how we best tell stories. I feel like this album has a very distinct band sound, like it’s got a few rock and roll tracks and some americana ballads, it’s the same guys and girls playing on all the songs and I feel really good about it. It’s very organic and down to earth, whereas the last record was kind of a pop record this one is definitely not. It’s americana, or a folk rock record, or something like that. It’s about the songs though, as always. I like the last record a lot too, but we’re moving somewhere, and I like where we’re going. I’m very lucky to still be working with my favorite people in making music. I can’t wait for people to hear the new songs, I think we’ll release the next single in November.

The upcoming album, like the previous one, is produced by Kristoffer Hylland Skogheim (Øra Studio). Could you tell us about your work together?

Kristoffer is one of my best friends, and for me one of the best and most promising musicians and producers in the country. We’ve worked together for maybe 7 years now. It’s good to work with Kristoffer, because he knows me and we’re in it together. We’ve made a lot of music together and we try to be there for each other. We’re good friends, and he’s very talented, I hope to keep working with Kristoffer for a long time.

And you also have plans for one more new album?

Yes, right now I’m writing music for a trio with two of my favorite people, Tuva Halse and Petter Fjerdingen. Good friends and fantastic musicians. I love to play with them and I really admire their artistry. They’ve both been playing with me for some time now. They’re on the new album and we’ve also played some concerts together just the three of us. Tuva also played on the last record. It feels special when we play, so I wanted to make an acoustic trio album with just the three of us, and that’s what we’re doing. Right now we’re writing the music and hopefully we go in the studio in the near future to pin it down. We don´t really know what this is going to be yet, but we’ll make sure it’s something special.

You are playing a concert at Antikvariatet on November 5. It’s been five years since you played there the last time, isn’t it?

That’s right! I played there in 2016 promoting an EP I was releasing at the time. Now I’m going there with Tuva and Petter. It’s a beautiful place to play, the atmosphere is very good and we know it’s going to be a special evening.

You are also playing at Hilmarfestivalen in Steinkjer on November 12. Could you tell us a little about it?

Yes, that’s also with Tuva and Petter. We’re really looking forward to it. We were supposed to play there last year but it got cancelled due to Covid so it’ll be nice to finally get to do that. It’s a folk music festival so we’ll pack our finest shoes for that one.

And do you have any more plans for this year?

I’ll focus on planning the release of the new album, there’s two more singles coming before it’s out. There’s no more shows planned as of right now, but that might change. And, of course I’ll spend time working with Tuva and Petter on our trio album, I’m really looking forward to that.