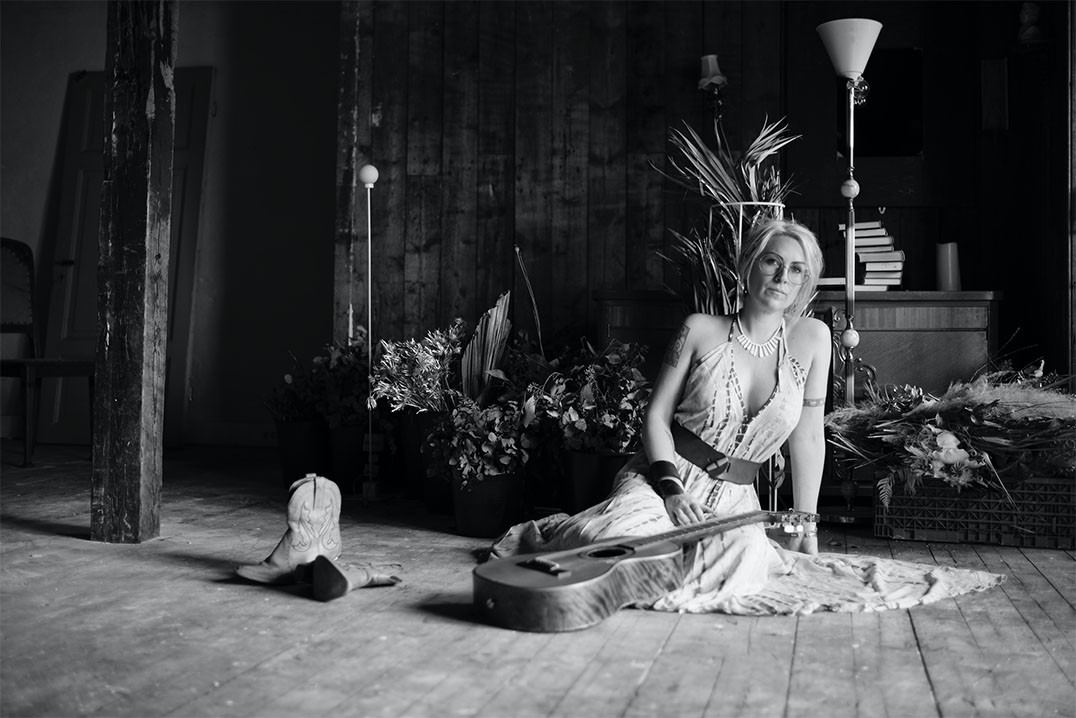 Rebekka Lundstrøm released her debut album “Carousel” in March 2020. The album garnered very good reviews both in Norway and abroad. And now Rebekka is releasing her second studio album “Silent Storms”. Read the interview with the singer-songwriter.

Compared to your debut album “Carousel” from 2020, what could you say about the “Silent Storms”?

“Carousel” was produced by Einar Fadnes, who was also my guitarist back then. On “Silent Storms” I’ve taken on the role as producer myself together with Rasmus Solem who recorded, mixed and mastered the album. It was important to me to try and stand on my own feet a bit more this time to see what I’m capable of doing.

I’m also working with a different guitarist on this album, Simen Svanevik Bendiksen and I’m playing guitar on three of the songs myself. Production wise “Silent storms” is more naked. I use pretty much the same instruments as on “Carousel” but there’s less of them. The mood is maybe even more melancholic this time and lyrics even more personal.

You debuted as a songwriter in 2016. How did you get into the music and what does music mean in your life now?

It was actually 2017. I have always loved to sing. When I was a child I loved the stage and always dreamt about performing. As I grew older I got more sceptical and insecure and didn’t think I could do it. I kept on singing, but mostly for myself and I started developing stage fright.

When I moved back to my hometown, Arendal in Norway, after some years abroad, people started inviting me on stage with them as they remembered that I used to sing back in the days. I really wanted to write my own songs, but didn’t know how. It was a Texan singer songwriter, Simon Flory, who started it all for me. I asked him how I could become a songwriter and he answered: “Just do it!” So I did.

At the same time I started taking guitar lessons with Fadnes. When I finally plucked up the courage to present him with some of my own songs, he was really impressed and started to convince me that I should record them. After playing my music live for some time I decided I wanted to try. So in 2019 I quit my full time job as a classroom assistant and took on a part time job in the pub to have more time for music, saved up money and recorded “Carousel”!

Music has always been my saviour. Most of my life it has been other people’s music playing that part for me, but now it’s also my own. I’ve made my own life jacket. I couldn’t be without. I’ve tried so many different jobs over the years and I can’t find my place in any of them. Music is the only place where I feel at home.

Music you are writing has a lot from country and folk. What attracts you to these genres?

I grew up in the Salvation Army. The music there has a lot of references to old country and bluegrass melodies. But I didn’t really discover the world of country music until a friend introduced me to her dad’s record collection at 14 years old. I loved it and she bought me a Buck Owens cd for Christmas!

I love the feelings in the music and the organic sounds. Real instruments and lyrics with meaning. And the harmonies! The folk part mixed in with the country makes it even more sensitive and delicate. I find it a good match for my lyrics, which are more than often quite sad. I love the melancholy in folk music. I’ve always had a special place in my heart for sad songs. They make me feel better.

Where does the inspiration for your songs come from?

Inspiration comes from everything around me and in me. It could be a sentence from a book I’m reading, a line from a television show, a lovely chord I hear in a song or something I observe while walking the dog. It comes from feelings, thoughts, dreams and experiences through my own life. I mostly write songs as self therapy. There’s something I need to process and get to the surface. I’ve never really been good at expressing all these thoughts and feelings until I started singing about them.

Could you tell us about musicians you recorded your new album with?

Yes! They are the best!

Simen Svanevik Bendiksen has been my guitarist for a couple of years now. He plays both acoustic and electric guitar. He’s always happy to play, full of smiles and he loves rehearsing, which I’m really pleased about. We do quite a few duo shows together and have learned to know each other really well musically over the past couple of years. Simen’s got a soft touch on the guitar and his finger picking really compliments my songs and sound.

André Sandal Stenersen plays the mandolin and does backing vocals. He is originally a bassist, but handles the mandolin so well! He also has a lovely voice and is great with harmonies, which is a big bonus. André always shows up prepared to rehearsals and recording and is always super focused, even after a long day of cutting men’s hair and beards. Yes, he is a barber and is always very well groomed.

Ole Kelly Kvamme plays the double bass. I think he was born with a bass guitar in his hands. When I first started to try out some of my songs on an audience a few years back, Ole was the first one to come up to me and say: “If you ever record anything, I’m in!” I thought he was only being nice to me and show me some support, but it turns out that he really meant it! Ole just knows how to play everything right away. Even when my guitar playing takes some weird turns he just catches on instantly. Geir Emanuelsen plays the banjo. Geir is also originally a bassist, but I think he loves the banjo more! Geir plays a lot of bluegrass so playing slow and sad songs is a challenge for him and every now and then he breaks out what we call “banjo hell” just to blow off some steam!

Geir is probably my most honest critic. He’s not one to wrap me up in cotton and tell me how lovely everything I do is. He tells me straight and is always pushing me to improve. So when Geir tells me something is awesome, I know he means it and it makes me really proud when I get praise from him.

Rasmus Solem plays keys. He is also the studio owner and he has recorded, mixed and mastered the album and produced it together with me. Rasmus is a multi talented musician who can play pretty much everything he picks up. He has an incredible ear for details and tuning. He hears things I don’t. He gets me, he gets my music and I completely trust him to make things just how I want them. He is an absolute dream to work with!

Rolf Magne Asser is an opera singer. I invited him in as a guest to do a duet with me on “Your Call”. I didn’t know him before he came into the studio. I had heard him sing and loved his deep Cohen-ish voice! Both Rasmus and I thought he’d be perfect for that song and we were right! He asked me how low I wanted him to sing and I answered him “as low as you get.” He started to sing and my jaw just dropped!

The guys are all local, from the same town as me. It’s a great music scene here and so many talented people to play with. I am blessed!

Earlier this month you played a concert as part of the Fjording Showcase Festival 2022. What was your impression? And what are your next concert plans for this year?

That was really cool! The weekend was packed with fantastic artists and great music and the whole thing was such a boost after two years of keeping distance .. !

It was the first time they put on this award for Americana music in Norway. I was nominated in the “Newcomer” category. I didn’t win, but the whole experience felt a bit like winning to me anyway! I played my showcase in a really cozy brown pub. It was packed with people and the atmosphere was so lovely. The audience was quiet and observant and I treasure the whole experience and already look forward to next year’s festival!

I’m writing all of this on the night before the night of my release party for “Silent Storms”. So I’ll get that done first and then a couple of days to let it all sink in before I start working on booking up what’s left of the summer. I already got a couple of festivals booked this summer and some other gigs around the south part of Norway. I played in quite a few new towns and cities last year, so I’m really hoping for more of that this year. There will be solo shows, duo and trio shows and some split gigs with other artists I’ve been collaborating with the past few months.

I can’t wait and I’m super excited about the season ahead!